Utah is now just two wins away from securing a return to the postseason.

I feel good about Utah's chances of making a bowl game. Don't you?

Sure, it's not a lock, and we should never think of anything as a guarantee, but it's hard to fathom Utah not winning two of their next six. Of course, now that I've said that...

But really, this team looks poised to return to the postseason and that's a huge lurch in the right direction. We need to prove 2012 was nothing more than an anomaly and with two wins, hopefully two that will come this week and next, the Utes can do just that.

So, do you foresee a bowl bid in Utah's future? If so, where are they going?

USA Today is convinced Utah ain't going anywhere in the second-half of the season - as they're absent from their bowl projection list.

The consensus seems to say Utah will either fizzle and not make a bowl game (which would require them to lose every game from here on out, sans, I guess Colorado) or play in the New Mexico Bowl.

Would you be okay with a bid to Albuquerque to take on ... Wyoming or a Chuckie Keeton-less Utah State team? 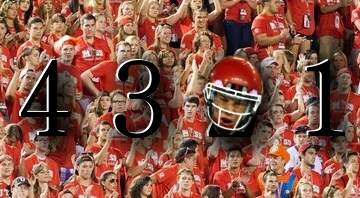