Utah and USC, plus all the other day one Pac-12 action

The Utes will participate in their second ever Pac-12 tournament - will this one go better than last years?

Share All sharing options for: Utah and USC, plus all the other day one Pac-12 action

The Utes enter tonight's tournament game with some strong momentum and face a team that is currently reeling. Not only are the USC Trojans backing their way into Las Vegas on a two-game losing streak, they're also being forced to replace starting center Dewayne Dedmon, who tore apart Utah in their lone meeting earlier this season, as well as his backup James Blasczyk after the two were in a brawl in Spokane this past weekend.

This is an important development considering the Trojans matched up very well with Utah (as was evident when the two last played back in January). Without their bigman, and his backup, the game's dynamics do change and you've got to think they favor the Utes. Still, this is not going to be an easy game, as JT Terrell and Eric Wise, whom both had 14 and 11 respectively against Utah, will suit up. This is a team with some talent and if the Utes expect them to just roll over and die in the wake of losing their center, well I think Utah is going to be in for a rude awakening. This team could have folded when Kevin O'Neill received his pink slip earlier in the year and they didn't. If anything, they came back and played that much harder - pulling themselves out of the conference cellar and finishing with a respectable .500 Pac-12 record.

But this is now a very winnable game and a victory, while I still don't believe it'll amount to much in terms of a potential conference tournament run, would still be a huge step in the right direction for Larry Krystkowiak and his team. More importantly, though, the possibility of victory helps bolster the entertainment value - something lacking in last year's tournament since no one really expected Utah to advance past the first round.

If Utah does manage to beat USC, they will take on Cal - a team that swept the Utes this season.

Here's the official bracket so you can keep track of all the action and also the start times for all of today's games. 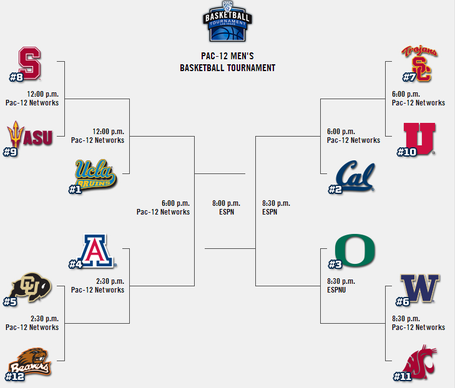 No. 8 Stanford vs. No 9 Arizona State

Here's to victory and a trip to the second round - which would put Utah only two games away from the championship round!