Utah football is holding its first 'Stripe the Stadium' event to kick off the 2013 season. Do you like the idea?

Share All sharing options for: Utes to stripeout RES for USU game

I don't know if any of you realize this, but it's August and that means Utah football begins this month! We're on the cusp of the 2013 season, folks, and that means, in the coming weeks, we'll go through fall camp, the final expectations for 2013 and, the greatest of all, we'll start planning for game week.

Of course, the Utes kicks off the season against instate rival USU. That game will be played at the end of the month, and I'm also guessing will prove pretty emotional in the wake of Gaius Vaenuku's death. But that game, I think we all agree, is going to be a huge indicator of what type of team we have this season. Utah's loss to the Aggies in Logan last year definitely undercut our optimism and it directly cost 'em a shot at a bowl game. So, while nothing will be guaranteed with victory, I think we all agree a loss would be devastating for the team and its morale.

Seizing the importance of this game, the fact there will be a bit of revenge in the air, the athletic department has decided to hop on board a recent college football trend of striping the stadium. It's not unique to the game itself, but it is unique to Utah - as the program has never done something like this in the past. Most of the time, the focus, outside blackouts, has been to wear red and, fortunately, that has proven successful over the years, specifically in the early months when the weather allows for diverse wear (the second the weather turns soggy, the less likely the crowd is completely awash in red).

So, I don't know how this will look when it's done because we've never done it, and I'll be honest - it does seem kind of a bit odd because red and white are two colors that when striped resemble a candy cane, circus tent or a Where's Waldo? convention than anything intimidating or interesting.

It might work out. I did Google red/white striped stadium and found a photo of a soccer match over in the UK where it looked pretty cool and Indiana has done something similar at their basketball games, while Arkansas did it for one of their games at War Memorial Stadium in Little Rock (not their home stadium in Fayetteville). So, it's been done, and it does look okay, and better than I had imagined before searching - but is it good for Utah?

I know we have a lot of traditionalists in our fan base who abhor any type of change - whether it's a different colored helmet or a more drastic different colored uniform. The blackout, back in 2008, was met enthusiastically by a great deal of fans, but I also remember others who felt it was stupid and that our colors should not change for a gimmick. Some even predicted its failure and we know how that went. Well here's some good news - we're not changing colors! The U is just asking that if you sit in a certain section to wear either red or white, which are Utah's colors.

Here's a map of the stadium so that you can check your section and plan accordingly (it is game month, after all!): 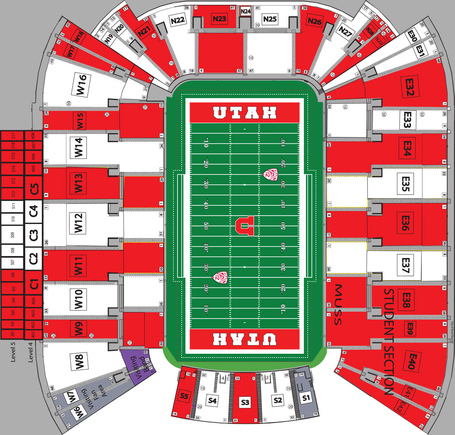 And I know there are probably some fans who are literally groaning as they read this, but even if you don't like the idea, I say play along because it'll look worse if it's half-assed.

But what do you think? Do you like that the U is changing things up or do you think these gimmicks should just die already?