Tuesday marks a big day for development as the Utes will have their first scrimmage of fall camp.

Share All sharing options for: Utes set for first scrimmage as defense wins the day during Monday's practice

Utah's defense won the praise of Kyle Whittingham Monday as the Utes prepare for a major step forward with the first scrimmage of fall camp. That'll happen today and should be a big indicator of where things are going for a few key names.

But on Monday, the Utes had a productive two practices. That's what you want to hear coming out of fall camp, and while last week there was a cluster of injuries, which certainly soured the mood, there is still a great deal of progress being made and, fortunately, things have calmed down a bit in that regard. Even Brian Blechen, who remains a possible redshirt candidate due to tendinitis, bounced back the last two days.

The good news wasn't just limited to Blechen, though, as Keith McGill, who missed Monday's earlier practice with a concussion, returned and had a nice interception - no doubt shaking off a bit of that concern.

Andre Lewis, who sat out the first week of camp, is also back from his injury. So, as you can see, the Utes are starting to regain their health all around and with the season now just a bit over two weeks away, not a moment too soon.

Like I said, today marks the first scrimmage and I anticipate it'll give us a good read on where things are going.

So, what would you like to see from the scrimmage?

I'd like to see Travis Wilson step up since, you know, he might be our season and all. 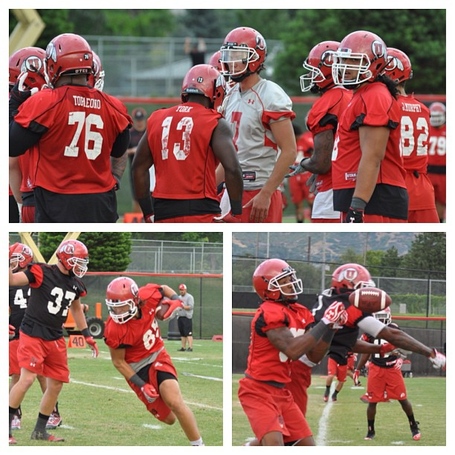 All-Access Look at the Linebackers:

All-Access Look at the Linebackers (via uathletics)

Utah will dedicate its new football facility this Thursday, so, anticipate some nice images and video from the local media (hopefully). It'll be an exciting, and historic, day for the program.

Also, the Utes released an update of their depth chart Monday. You can view it here.