Offense steps up in first scrimmage

Utah held its first scrimmage of the fall camp and the offense pretty much won the day.

Share All sharing options for: Offense steps up in first scrimmage

Travis Wilson is likely to be Utah's starter come August 29th. Though he didn't have a spectacular scrimmage, the quarterback produced the results needed to solidify his position as the Utes' number one quarterback. Wilson finished the day 3-7 for 56 yards and a touchdown - but also left early because of a tweaked ankle. He's expected to be fine.

More importantly, Utah's offensive line received praise for their play in the scrimmage. I take this as very good news, considering, of course, this was a huge area of concern for the program last year. The Utes' tight ends, including Westlee Tonga and Jake Murphy, also looked very good, which should help bolster a questionable offense.

Much of the success seen on the offense could also be attributed to a shallow defense. A great deal of Utah's starters, including Brian Blechen, who continues to be a concern because of his tendinitis, Trevor Reilly, Eric Rowe and Tenny Palepoi sat out the scrimmage. So, it's hard to get a full read on both sides of the ball, though, Kelvin York and Conner Manning stood out - the latter proving that, even though it's young and inexperienced, the Utes have considerable depth at the quarterback spot.

Andy Phillips continues to lock down the top kicking spot as he was 5-5 on field goals and 2-3 on PATs. It would be nice to have consistency at kicker again.

So, I think it was a productive scrimmage. It doesn't appear anything amazing happened, but conversely, there was nothing really worrisome, either.

Hopefully the progress continues further into camp and the Utes can shore up some of their weaknesses. 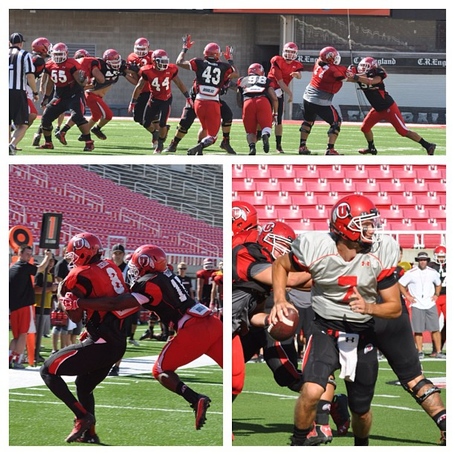