Travis Wilson looks like he's locked up the starting role heading into preparation for Utah State.

Wilson, who completed 12 of 18 passes for 281 yards and had two touchdowns, is likely to have secured the starting job as Utah's quarterback this fall. Not that any of it was really in doubt. But it's good to hear he's locked down that position more through his ability and not by default.

Brian Blechen played in the scrimmage, and had an interception, so, it remains unclear what is going to happen with his knees and whether or not he will redshirt because of them. It really just depends on the day, as one day he's limping and sore and the next out there doing superhuman acts of amazement.

Honestly, if Blechen is good to go, I'd be happy. But I don't want to have him hobbled out there in the secondary this season. So, hopefully they can figure his knee problem out prior to the start of the season.

I should point out that he wants to play and says he is not considering redshirting. But, you know, sometimes the player doesn't have a say in the matter. I guess we'll see.

Utah's defense was still missing Tenny Palepoi, Eric Rowe and Trevor Reilly, so, I'm sure that played a role in some of the offense's success. Still, it's always good to hear the offense is producing, because that's exactly what we need for this season to be anywhere near successful. 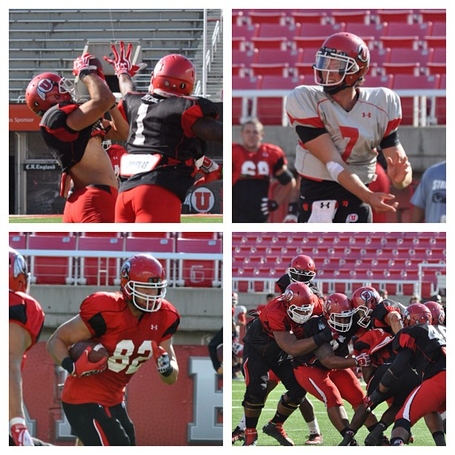