Utah has named its captains for the 2013 season and continue to see overall progress as fall camp begins its final week of camp.

Travis Wilson, Trevor Reilly, Tenny Palepoi and Jeremiah Tofaeono were all named this year's team captains as the Utes entered their final week of fall camp.

It shows how much trust the players are putting in Wilson, whose position at quarterback didn't necessarily guarantee him the offensive captain role - as last year it was John White and not Jordan Wynn.

He's also a sophomore and I'm not quite sure who the last sophomore captain was for Utah, so, it's probably been a few years.

Beyond that, the offense continued its improvement Monday morning, though, Whittingham remains candid about the need to clean some stuff up. Hopefully that comes during the final week of camp and then as the team moves on to prepare for USU.

Micah Thomas was back at quarterback today, despite ending last week playing safety. Even though that was a temporary move for now, I would not be surprised if he returned to the defense in the coming seasons. But for now, he's back with the quarterbacks and it's possible, along with Brandon Cox and Conner Manning, he redshirts this season. That, of course, suggests Adam Schulz is probably backing Wilson up, even though Manning and Cox have shown some great skills this fall.

This is the final week before game week. That's both scary and exciting. Hopefully this team is ready because, in a blink of an eye, they'll be taking the field against USU and potentially making or breaking their season right out of the gate. 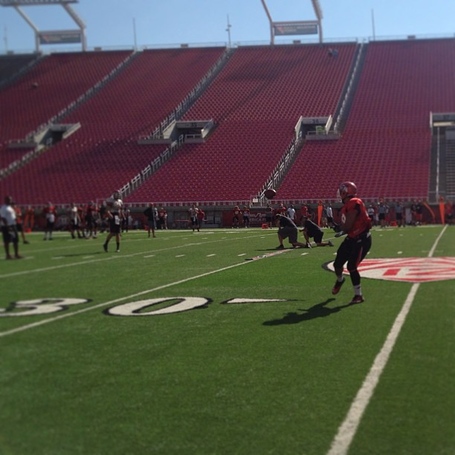