Kyle Whittingham not overly impressed with the Utes in first day of camp.

I didn't expect much different from the first day - not with all the kinks and nerves that need to be worked out. And, in reality, there was no major revelations about the 2013 Utes. In that regard, I guess we should be happy? I don't know.

Travis Wilson is the quarterback. That's no surprise. We all knew the job was his to lose and Whittingham reiterated it this afternoon. Wilson is approaching fall camp as a competition, believing the job is still not his yet. I like hearing that. No need to take anything for granted here.

Wilson, Adam Schulz and Brandon Cox all looked okay (were you expecting something different?), while Conner Manning and Micah Thomas looked a bit lost. But that's to be expected. You know, with this being their first camp and all (though, as it was in spring, Cox appears to be ahead of the curve).

Andre Lewis was in the pit today, and Lya Wodraska from the Tribune reported he had pulled a hammy, which would not be a good start to camp for the former JC wide receiver, however, on Twitter, Dre shot down those rumors and says he'll be back out there tomorrow.

Keith McGill needs to drop pounds, Bill Reilly said, which is disappointing, but hopefully he can get in better shape between now and the start of the season. Carlos Lozano is another one who needs to lose a few, and will remain in the pit until he's down to an acceptable number.

Former Miami Hurricanes linebacker Gionni Paul has joined the team. There is some confusion as to whether he'll be eligible this season, though the Trib's Tony Jones says it's possible due to Miami's sanctions. We'll see.

So, was there anything surprising about today's camp? Not really. There rarely ever is after the first day. The good news, I guess, is that the only serious injury doesn't appear to be all that serious. Beyond productivity, I'm looking for a healthy fall and I hope we get it.

Finally, here's something I created because, really, I do see this season as Utah's potential chance at redemption.

If there are any photos or videos you've created that you'd like to show off, e-mail me and I'll happily post 'em here on Block U! 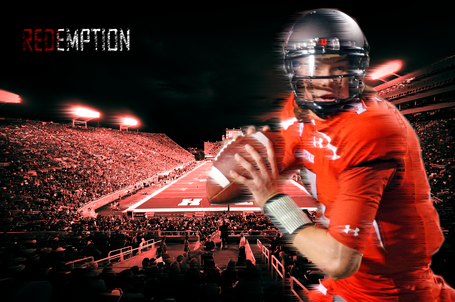