Share All sharing options for: Progress continues in day three of camp

It's actually been a pretty quiet first three days for the football program. I take that as good news, because, at this point last year, the Utes were battling back the injury bug. I don't want to jinx 'em (so, knock on wood), but this is what you want to hear. It just seemed like last year's team began the season under a cloud of setbacks, whether it was with the offensive line or questions surrounding Jordan Wynn, and it pretty much just carried over throughout the remainder of the season.

So, while we're looking for progress and improvement at certain positions, it's also important to focus on the overall health of the team.

Speaking of injuries, Micah Thomas, who sat out yesterday, was back in action today. So, that's good. Andre Lewis is still sidelined, which clearly shows his injury is more significant than he was letting on after word got out he pulled a hammy. This is an inconvenience, of course, because he is a talent and you want him out there trying to lock down the #3 receiver spot behind Kenneth Scott. I'm still optimistic, but you never know. Sean Fitzgerald and Anthony Denham are instead battling for the spot while Lewis recovers.

Once again, it appears running back Troy McCormick (I so want to type Troy McClure) is turning heads. That's exciting and really underscores the potential at this position. Replacing John White IV is going to be tough, because he was such a workhorse, but it does seem the Utes have the tools to do it.

Reshawn Hooker is getting more reps at safety. Brian Swinney tweeted out that he confirmed with Kyle Whittingham that he'll be moving over to that position. Could that indicate the coaches expect Gionni Paul to play this season or are they not convinced Tevin Carter will make it? It also could have to do with Utah's move to the 4-2-5 package. Either way, Hooker at safety doesn't seem like too big of a stretch.

Whittingham had some positive words for defensive tackle Latu Heimuli, calling him one of the best tackles in the Pac-12. Of course, much of that depends on whether or not he remains healthy.

Travis Wilson didn't have the greatest day, but Dennis Erickson did praise his athleticism. The news surrounding Wilson since camp started has been muted, which I take as a pretty ho-hum sign. What I mean by that is he's chugging along and while maybe not dominating, isn't outright struggling to the point where his play warrants mention.

The other quarterbacks are impressive too. Conner Manning won the praise of Whittingham, who says he plays like a veteran, and Brandon Cox continues to be one of the most exciting true freshmen I've seen at Utah in a long time. Wilson is the guy, and I hope he is because I don't want to start another true freshman this season, but if Cox is the future, we're in good hands.

Biggest news today, I guess, is Hooker moving positions. I'm inclined to believe it has to do with Carter, but hopefully I'm wrong. 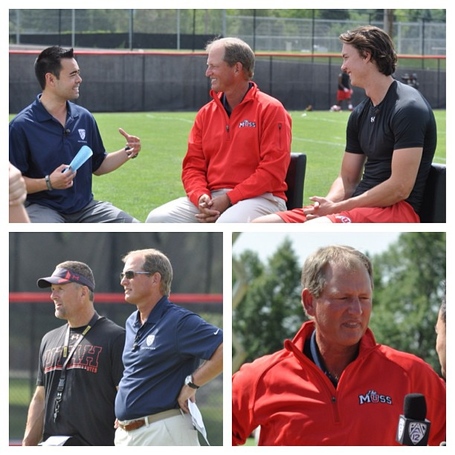 ESPN 700 has an interview with Marc Pouvave, who, if you'll remember, missed last season due to injury, Brian Johnson and Aaron Roderick.

The Pac-12 Network's Bryan Fischer was also in town and tweeted out this:

One if the few blemishes on Saban's record came thanks to @Utah_Football pic.twitter.com/QjVrhJzJjI

I miss that. I definitely need Utah to get back to that level again.

Finally, here's a great video to get you pumped up for the season. We're only three weeks away!