Share All sharing options for: Utes offense struggles in fifth day of camp

Okay...not really. But Friday's practice left a lot to be desired. I guess when you're going through camp, odds dictate at least a few days will disappoint. Today was one of those days. Best to move forward and focus on Saturday's practice.

The one concerning thing out of Friday was the play of the offensive line. It's a concern because, as we witnessed last year, if the Utes' o-line can't produce, neither can the offense and it's likely we're on the path to another losing season. I don't want to read too much into one day, but it's hard not to pull back a bit and wince at the news the line struggled.

One thing that Utah is adjusting to this fall is tempo. Dennis Erickson wants to leave anywhere between 15 to 20 seconds on the clock and that has been the focus of camp since day one. But that doesn't mean it'll be easily implemented and we're seeing why today.

Even so, it's one day and I don't think there is enough reason to worry about the offense yet. We knew it would take time to fix, and that's exactly what we're seeing. Now, obviously, you want way more good days than bad, especially when it comes to Travis Wilson, but sometimes it doesn't work out that way.

The good news, I guess, is that the defense looked good today. That can be taken two ways - either the offense is that inept where it makes Utah's suspect defense look good, or the defense can improve, and is improving.

Honestly, I don't know what one it could be at this point.

Speaking of the defense, Keith McGill was shaken up a bit and had to leave practice, while Davion Orphey spent it in the pit. Whittingham was quick to say neither injuries appeared serious, and that he hoped they would be back soon enough.

Unfortunately, the same couldn't be said for freshman defensive end Moses Folauhola, whose career ended today. It's unclear why, but it is medical related. Best wishes to him.

According to Bill Riley, Pita Taumoepenu is expected to be in camp tomorrow, but I don't know if that means he has been cleared to play or if it'll happen soon. So, I guess we'll see.

Two-a-days begin Saturday, which is always scary considering now practice is really going into overdrive and, well, we've had some unpleasant news already. Hopefully we've gotten the worst behind us in that regard.

Utah football posted this photo of camp on Instagram: 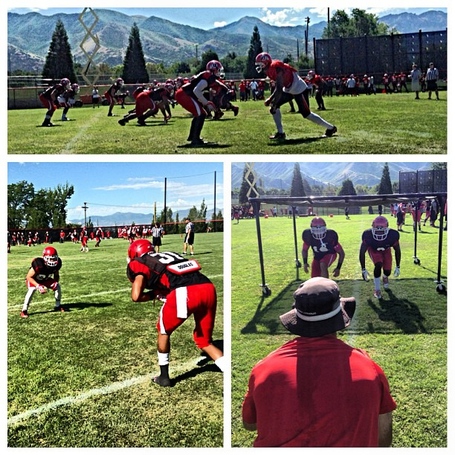 Happy Friday, everyone! Hope you have a safe weekend.