Earlier this week Coach Whittingham released the final depth chart before the season starts, we discuss what has been announced.

The quarterback battle is over, if it was ever really a battle to begin with. This past week, junior Travis Wilson was named the starting quarterback for the Utes. That announcement wasn't much of a surprise for most people, but there definitely were some surprises.

First, the announcement that walk-on wide receiver Tim Patrick is now in the starting line-up was a big time shocker. Patrick leap frogged Delshawn McClellon and Andre Lewis, and also made the coaches slide Kenneth Scott to the slot. Patrick has been making waves ever since he's arrived on campus, and he even was a late enrollee!

At linebacker Pita Taumoepenu has made some noise and is now in a dead heat for a starting roll, after moving from defensive end due to lack of depth at linebacker. It will be interesting to see how the linebacker position rounds into form once Gionni Paul returns from his foot injury, and if Jacoby Hale can make it back.

One of the most interesting developments from this fall camp, and with the new depth chart, is the emergence of some of the true freshmen. Boobie Hobbs at corner, Lowell Lotulelei at defensive tackle, Wallace Gonzalez at defensive end, and Andre Godfrey are all pushing for serious playing time. Coach Kyle Whittingham stressed the depth and speed of the past signing class, and looking across the depth chart, he's right.

This is very much a different looking roster from what we last saw in November against Colorado. Just watching media sessions at practice, it is easy to see the increased speed and athleticism on the field.

What are your thoughts about the depth chart and the various position battles? What names on the two-deep surprise you? Who is missing?

We discuss the depth chart on this episode of The U Fan Cast, check it out and chime in on the conversation! Are the Utes a better team? 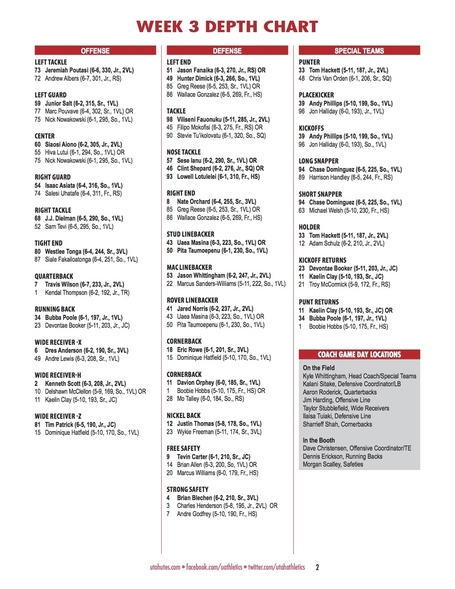