Thursday night, the Sun Devils awakened a sleeping Bruin, and the whole Pac-12 started to wonder what the future held. Meanwhile, on Saturday, the Utes offense melted down in epic fashion, giving away a game that had no business being won by the team that won it. So how good are the Bruins? How bad are the Utes? What is Utah going to have to do to come away with a victory in the Rose Bowl?

Share All sharing options for: Statistically Speaking: Utah vs UCLA

So, are the Utes terrible?

Following such a depressing loss, it's a good time to sit down and have a heart-to-heart about the nature of football, and bid a fond farewell to predictability. With a nearly infinite number of variables on each and every play, over a hundred plays, and the ability for one big moment to create a huge swing in winning odds, football is a sport which defies prediction. Even when you have a lot of data about the very game you are playing, football can throw you for a loop. Take a look at this win probability chart (main article here). There was a reason we were all thinking 4-0 after 10 minutes. It was nearly a certainty.

[Warning: the image you are about to see is graphic and not for the faint of heart.] 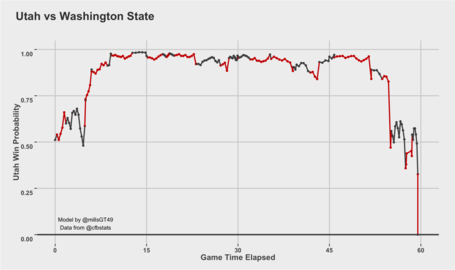 This isn't to say that WSU didn't outplay Utah in this game. They certainly did, earning their victory through excellent playmaking at critical moments. What's important to understand in processing a result like this is that there is a lot of randomness inherent in a great play. In the Utes' case on Saturday, when Utah quarterback Travis Wilson would finally get his act together and make a great throw, another part of the play would fail to work. The half a dozen or so times that Conner Halliday executed exceptionally well, his receivers were able to capitalize on that opportunity and make huge plays. It's not fair to the Cougars to call it luck, because it is earned through execution, but it isn't entirely under their control.

Ute fans can take comfort in the idea that it was an extremely unlikely result, requiring poor execution on nearly every down. The Utes are bound to stumble into scoring opportunities, even if it turns out they aren't the offense we thought they might be after watching them pick apart lesser opposition. The truth likely lies somewhere in the middle; it is incumbent on every player in the unit to take it upon themselves to not let that kind of performance happen again.

The advanced metrics do not think much of the Utes' offense, as we will discuss below. Over the course of a season, advanced numbers tend to become more static. After the first game or two, numbers can swing wildly up and down but by the sixth or seventh contest, the metrics have a handle on who a team is and it can be very difficult to change that perception. The Utes are going to need to prove something over their next couple of games, by being efficient and explosive against UCLA and Oregon State. The truth is that if they can't prove it by October 16th, they probably won't prove it at all.

The Bruins are seen as a bit of an enigma. They struggled to make a statement in their first three games, eking out wins over three nonconference opponents. Brett Hundley did not look sharp, and then went down with an injury. Then they rolled into Sun Devil Stadium and pasted the 15th ranked team in the nation, with a virtually flawless offensive performance (10 yards per play, 0 turnovers) and a ball-hawking, opportunistic defense. The Bruins are now the 8th ranked team in the nation, but is that just a mirage?

The Bruins are 100% for real. They boast a potent offense and a legitimate defense and special teams unit. They have really special athletes. Brett Hundley has the 10th best passer rating and the 8th best QBR in the country, placing him firmly in the Heisman discussion. Paul Perkins is averaging well over 5 yards a carry, and they have three receivers averaging over 17 yards a catch.

The ASU game wasn't quite as ugly for the Sun Devils as it looked, though. ASU was in position for a field goal that would tie the game going into halftime when the explosive Ishmael Adams returned an interception 95 yards for a score. ASU averaged 5.96 yards per play and apart from 4 turnovers and a kickoff return were able to hold their own against the Bruins.

The Bruins have chinks in the armor, but they are a very tough team to beat, and playing in the Rose Bowl won't make it any easier.

The Utes took a dive in most rankings this week after losing to an opponent which advanced stats don't think much of. The Utes dropped to 38th (7.1%) overall from last week's 21st position. The Bruins are ranked 15th (15.8%) by this metric.

The Utes make their best push against the Bruins when it comes to efficiency. UCLA has been remarkably efficient, and is ranked 9th (.237) in the nation. Utah has held their own, ranked 24th (.158).

These are some ugly efficiency splits for the Utes. The defense looks competitive, and the special teams looks fantastic, but two lackluster performances from the offense have put the Utes on the cusp of being in the bottom half of the league. UCLA's defense has looked reasonably stout overall, but the Utes are going to need to find a way to exploit what passes for a weakness if they want to stay in this game. At the Rose Bowl, ESPN gives the Utes only a 20.6% chance of coming away with the W.

These numbers are no kinder to the Utes, who are ranked 42nd overall, while the Bruins have earned a 7th overall ranking. Vegas doesn't like the Ute's chances either, with the Utes opening as 12 points dogs, a line that has worsened to +13.

Oy vey. The Utes' offensive struggles look like they may be more than a blip on the radar, with little opportunity to get things fixed between now and November's games against Arizona and Colorado. The special teams unit continues to be a bright spot, and the defense is as stout and fierce as ever, but the Utes are going to need to figure out how to put points on the board against good teams in order to win games.

To win this game, the Utes are going to need to do something similar to what the Cougars did in Salt Lake City, execute exceptionally well in the moments that matter most. Wilson will need to continue to not throw interceptions, and the defense is going to have to come up with big plays that stop drives cold. Kaelin Clay, Andy Phillips, and Tom Hackett will need to make a difference in the field position battle and ensure that the Utes have short fields while the Bruins have long ones. Most of all, the Utes are going to need a healthy dose of luck. I don't trade in luck, though. I am here to tell you what the numbers have to say... and the numbers say loss.