Utah basketball's storied arena will see some renovations before the start of the 2014-2015 season.

The Huntsman Center is arguably the most historic gym, outside Pauley Pavilion, in the Pac-12 - yes, even rivaling the greatness of the McKale Center in Arizona. It is, after all, the site of College Basketball's Greatest Game and has hosted the second-most tournament games in NCAA history.

It also happens to be the largest arena in the conference.

So much history has happened inside the walls of the domed mammoth that can be seen from a great deal of the Salt Lake Valley. It's everything that is Utah basketball - Jerry Pimm, Tom Chambers, Danny Vranes, Andre Miller, Andrew Bogut, Keith Van Horn and the legend himself: Rick Majerus.

When the arena is full, it's about the loudest and toughest college venue in America.

It's also an arena that has, for a while now, shown its age.

Therefore, Utah is taking steps to renovate the gym and give it a look every bit as deserving of its history.

This is just one step in a larger renovation plan.

Of course, the upgrade isn't going to be dramatic. So, don't anticipate a stylish new arena when you attend some Runnin' Utes basketball games in November - but it's a start.

The new Huntsman Center will include: 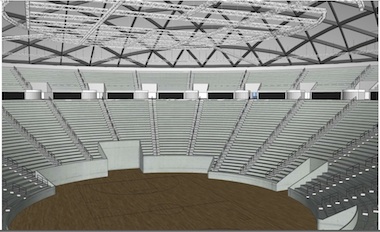 I think it is an exciting time for Utah basketball. Clearly the future is bright for a program that has spent much of the 21st Century stuck in an overwhelming trash heap. Hopefully this renovation leads to continued success and a program capable of contending with the elites of the Pac-12.

This is hopefully a step in that direction.