Will next season see the Utes return to the NCAA Tournament?

Share All sharing options for: A look forward at the 2014-15 Utah Utes men's basketball team

The news of Delon Wright's return to the Utes for his senior season sent minor shockwaves through the Pac-12, as the Utes' point guard was considered a potential first round pick had he decided to enter the NBA Draft. With Wright's return, the Utes now return basically – sorry, Renan Lenz – their entire squad from a team that rated highly enough in Ken Pomeroy's ratings to be considered for an at-large selection in the NCAA Tournament. So what should the expectations be for Utah going into 2014-15?

Put simply, this should absolutely be an NCAA Tournament team next season if their players take even the smallest step forward in their development. The question now is whether or not they can go one step further and compete for the Pac-12 title.

The Utes return 94% of their scoring, 94% of their rebounding, and 97% of their assists from the 2014 iteration, which is going to be a higher percentage than any other Pac-12 team. Wright is obviously the crown jewel of the returning class. He led the Utes in every statistical counting category, including blocks and steals. I've written about him more at length here, but just to re-hash a bit more of that statistically, let's put him in context of the rest of the Pac-12. The 6'5 point guard finished second in the conference in PER, true shooting percentage and steal percentage, and sixth in assist percentage.  He did all of this with a somewhat low usage rate of 23%, which is due to sharing the point guard duties with Brandon Taylor*. It's not an exaggeration that Wright does literally everything for the Utes. They'll go as far as he'll take them next year.

*It's absolutely incredible that a player with this low level of Usage Percentage(USG%) could have a Player Efficiency Rating (PER) that high, as a high usage rate is highly correlated to having a higher PER because of the way the formula works. Wright is undeniably one of the most underrated players in the entire NCAA.

Surrounding Wright is a group of flawed, but skilled players who are the key to Utah's run next season. Leading the way is rising junior Jordan Loveridge, a high-usage but highly inefficient combo forward that should probably cede some of his shots to Wright next season after slightly regressing this season. Loveridge averaged 14 points per game in conference, but had a sub-50% true shooting percentage and only made 28% of the nearly five threes he took per 40 minutes. It might not be an exaggeration to say that he was least efficient high-usage player in the Pac-12 this season. A large portion of Utah's hopes next season will be tied to whether this former top-100, four star recruit can realize some of the potential he had upon arriving in Salt Lake City. If he can step up and actually knock down threes, the Utes will be difficult to beat. If not, Utah may again be right on the bubble line. 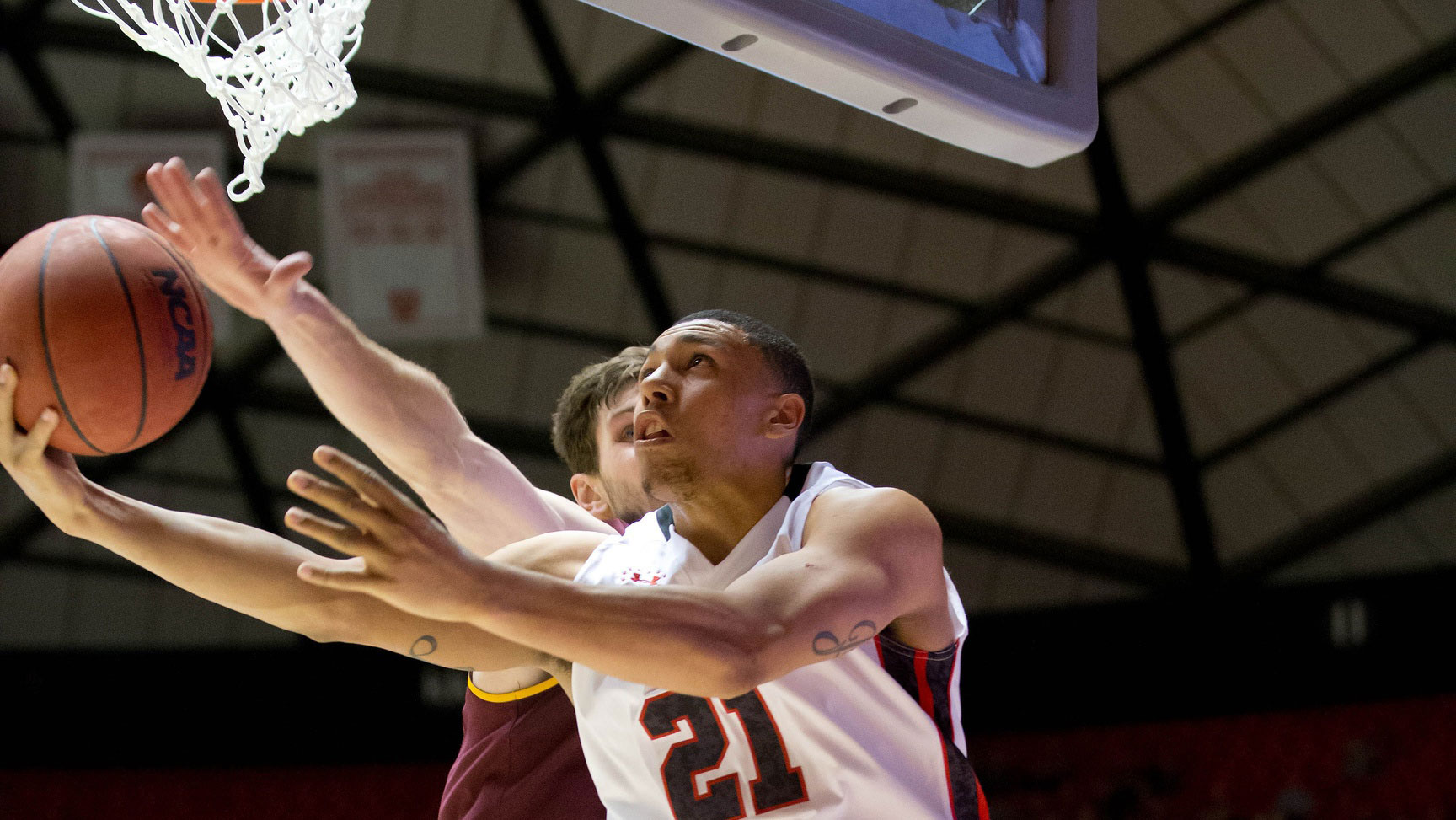 The reason I say that is because so much of Utah's offense is tied to the spacing they can get from their shooters. Wright isn't particularly a great shooter himself from beyond the arc, but he's incredibly efficient at the rim, finishing nearly 72% of his attempts there. Utah's offense is tied so closely to Wright getting into the paint and breaking down the defense that he needs space to operate.

With Brandon Taylor and Dakarai Tucker, they get part of that as both players shot 39-40% last season from three and are legitimate threats from deep. If they can get Loveridge to start knocking down threes consistently, it opens up all sorts of different things for Wright. They can start running pick and pops where Loveridge can get easy three-point looks, or use him as a spot up shooter the defense has to respect while utilizing a big like Dallin Bachynski in the pick-and-roll.  Wright might be the best returning point guard in the NCAA at making decisions in the paint once he gets there. The more they can let him handle the ball and attack, the better the outcome will be for Utah's offense. 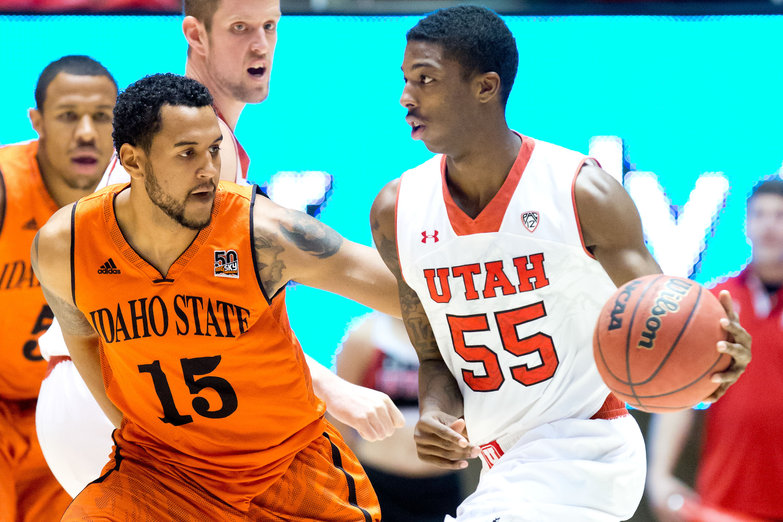 The defense should continue to be as strong as it was this season, finishing in the top 10% of Ken Pomeroy's adjusted defensive efficiency. Their rating of 96.5 was nearly eight points better than the NCAA average of 104.3, so they were doing a lot right on that end. Like with most things, it starts with Wright, who can guard up to three positions on the perimeter because of his quickness and long arms. Overall, their team on the perimeter is actually pretty big in general, with only Taylor under 6'5. This allows them to create some matchup problems for other teams, and mostly prevent penetration - which is seen by the fact that teams only took 31% of their shots against Utah at the rim this season, which was in the top 15% of the country.

Getting more production from their big men is going to be important on this end as well as on the offensive end. Bachynski and Jeremy Olson put up solid per-minute numbers splitting minutes at the center position, but will be called upon to put forth a slightly stronger performance next season.  They do bring in Brekkott Chapman, a 6'8 power forward out of Roy, Utah who is rated 54th in the country 247's Composite rating of scouting services.  He's a left-hander who plays a smooth, skilled, smart game that may allow him to get on the court if he can put on a bit more weight between now and next season.

The Utes also bring in 6'9 Kyle Kuzma, who was a late blooming prospect that hasn't really grown into his body quite yet, but could provide some size and shooting. My guess is that he doesn't see the floor much in his first season for Utah, but could really pay off down the road as a great combination of size and skill. Three-star Boise, ID point guard Isaiah Wright, who missed nearly two months with a broken wrist his senior season, is also joining the program, but likely falls into the same level of expectations as Kuzma.

Now, let's move forward to the things that the Utes' roster can't control. The biggest thing that held Utah back from making the NCAA Tournament this season was a complete and utter disaster of an out-of-conference schedule that included nine games against opponents outside of the top 240 teams in in Ken Pom, two of which weren't even Division 1 opponents. Coach Larry Krystkowiak and the rest of the athletic department should have been ashamed by that slate.

The Utes need to tighten up their scheduling for next season, and really see what this group of upperclassmen can do against tough competition. This is a really great place for Utah to pick up some big wins, as older, more experienced teams tend to perform very well early in the season. Krystkowiak and company should go out of their way and schedule aggressively out of conference. Playing tougher teams early might also help the Utes be more prepared for the early portion of next conference season, where they lost six of their first nine games this season.

Given these facts, the Utes will undoubtedly be better next season than they were during this one, and anything less than an NCAA Tournament appearance should qualify as a disappointment. But can they contend for a Pac-12 title? My guess on that is no.

Arizona will return at least T.J. McConnell, Kaleb Tarczewski, and Gabe York, along with potentially return Nick Johnson and Rondae Hollis-Jefferson (sorry Aaron Gordon, you're gone). Then, to top it off, they have a top 10 recruiting class coming in led by Stanley Johnson, a 6'6 wing that should make an immediate, impactful footprint on the Wildcats in the way that Gordon did this season. I don't think the Utes have much of a chance of beating the Wildcats for the crown of the West.

However, outside of the Wildcats, the Pac-12 will be pretty wide open. UCLA has already lost Kyle Anderson and Zach LaVine to the draft, could potentially also lose Jordan Adams, and will lose the Wear twins to graduation (finally). The Pac-12's surprise Sweet 16 team, Stanford, loses Dwight Powell and Josh Huestis. Arizona State loses Jermaine Marshall and Jordan Bachynski, and Oregon loses Jason Calliste, Mike Moser, Jonathan Loyd, Waverly Austin, and Richard Amardi. The Pac-12 will be young next season, which could really set the stage for an upstart, upperclassman squad to upstage the perennial powers.

That team could quite plausibly be Utah, a program that is looking good going into the 2014-15 season.

Sam Vecenie is a contributor at SBNation.com, Fear the Sword, and Land-Grant Holy Land