Tuesday, the Associated Students of the University of Utah will vote on a resolution to change the Utah fight song, Utah Man.

On Tuesday, the Associated Students of the University of Utah will hold a special joint hearing of its Assembly and Senate bodies to consider passing a joint resolution regarding potential changes to the Utah fight song, Utah Man. In particular, the hearing will build on a joint resolution passed early this month by ASUU, which stated, "Whereas some of the language in the Utah fight song is of concern to many students and faculty."

The hearing is scheduled to take place on April 22, beginning at 4 p.m. in the City Creek Room at the University Guest House. As per usual for ASUU legislative body sessions, the hearing is open to anyone who wishes to attend to listen to the debate. Although as of Monday, no specific changes are being proposed at the joint hearing, Tuesday’s meeting will determined whether or not a joint resolution is sent to university President Pershing’s office for consideration. If the joint session decides to vote on the matter and it passes, a new resolution requesting changes to the Utah Fight Song will be sent to the President’s Office for further consideration.

BlockU obtained a copy of the draft language of the resolution being discussed. In particular, it address the title of the song "Utah Man" as being exclusively referring to male members of the University of Utah community. (It should be noted that while the song is commonly referred to as the Utah fight song, its official name as copyrighted by the Trademarks and Licensing Office of the university is "Utah Man.") Furthermore, the resolution states that "The phrase ‘co-eds are the fairest’… can be reasonably interpreted as objectifying women… while also supporting a hierarchy built on complexion or skin tone, privileging a white or ‘fair’ appearance."

Due to the unique nature of this joint resolution, it does not, necessarily, have to be voted upon by the Board of Trustees nor brought to consideration for the Alumni Association or Athletics Department. Calls to both student body president Sam Ortiz were not returned, and the President’s Office did not comment on the matter.

The text of the resolution is shown below. 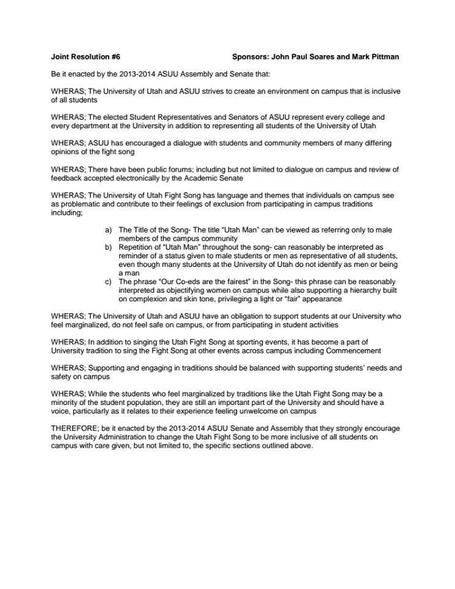 Panel discussion to happen around proposed changes to the fight song!