Utah's 2013-2014 schedule was maligned as being one of the weakest in the country and may have cost a 20-win team an NCAA bid. For the coming season, Runnin' Utes head coach Larry Krystkowiak and his staff have stocked the 2014-2015 schedule with 18 games against teams that reached the post season last March.

The Runnin' Utes announced its 2014-15 non-conference schedule today, along with preliminary dates for Pac-12 contests. In the coming season, the Utah men's baseball program will play 18 games against teams that reached the postseason in 2013-14.

"This non-conference schedule contains a challenging slate of games, both home and away," head coach Larry Krystkowiak said. "We, as a staff, have a strong belief in this team and this schedule, while getting us ready for the rigors of Pac-12 play, will help us take the next step forward. We also wanted to ensure our student-athletes have experiences that they can treasure and keep with them after their playing days. We are very excited for the upcoming season and can’t wait to get things rolling."

Last season, the Utes went 11-1 in non-conference play en route to 21 wins and a berth in the National Invitational Tournament. Utah was 18-2 at home during the 2013-14 campaign, the most wins ever in one season at the Huntsman Center. However, the non-conference portion of the schedule was widely regarded as weak and may have cost Utah a berth in the NCAA Tournament. There was also the perception Utah should have played more away from the Huntsman Center with just one road game (at Boise State) in 2013-2014. The coaching staff made a clear effort to schedule better teams, as well as address the road issues.

Utah opens the upcoming season on Thursday, November 6, hosting Pacific in an exhibition contest at the Huntsman Center. The regular season tips off on Friday, November 14 in the home opener against Ball State. (Former head coach Rick Majerus coached the Cardinals from 1987-89 before arriving in Utah.) The Utes defeated BSU Cardinals last season, 88-69.

The longest home stretch of the season for the Utes begins on Friday, November 21, as UC Riverside comes to Salt Lake City. Utah will then host its annual multi-team event November 26-29, including North Dakota, Alabama State, and Texas-Pan American. UND was the runner-up in the Big Sky last season and played in the CollegeInsider.com Tournament while Alabama State also played in the CIT after finishing with 19 wins.

On Wednesday, December 3, Utah plays a non-conference home game against Wichita State. The Shockers went 35-1 last season and finished the year ranked No. 2 in the Associated Press final poll. They were the first team in a decade to finish the regular season undefeated at 31-0, and the Shockers went on to garner a no. 1 seed in the NCAA Tournament, ultimately falling in the round of 32 to Kentucky.

The following week on December 10, the rivalry game tips off in the Marriott Center. The Utes defeated the Cougars in the Jon M. Hunstman Center last season, 81-64, and went on to capture the Deseret First Duel for the second year in a row.

The middle contest of a three-game road swing will see the Utes travel to Kansas City, Mo., for a contest against perennial power Kansas at the Sprint Center on Saturday, December 13. The two teams have played only once before with the Jayhawks earning the victory at Kemper Arena in the opener to the 1995-96 season. No. 2-ranked Kansas topped the No. 8-ranked Utes 79-68 despite 22 points and 10 rebounds from Keith Van Horn.

The final road game of the non-conference season will be in Las Vegas as the Utes take on UNLV in the MGM Grand Showcase at the MGM Grand Garden Arena. These two former MWC rivals have played each other 46 times and will meet for the first time since 2011 at the site of this year’s Pac-12 Tournament on Saturday, December 20. 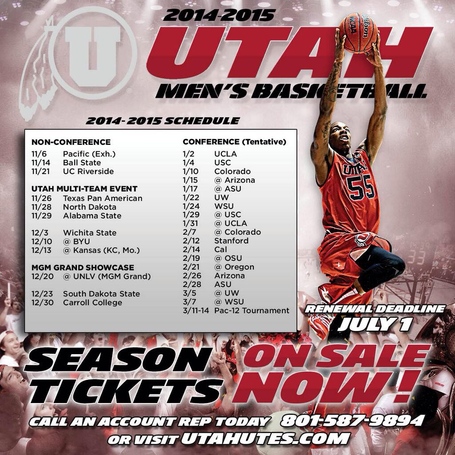 The Pac-12 dates, listed below, are tentative at this point, and definite game times and television information will be announced on September 1 by the conference:

JANUARY 2-4: Utah will open its Pac-12 season vs. UCLA and USC. The Pac-12 will play all its games on Friday through Sunday the opening weekend to avoid conflict with the January 1 New Years Day holiday.

JANUARY 7-11: Utah hosts Colorado, which means the Utes begin with their longest Pac-12 home stand of the season.

JANUARY 14-18: Utah hits the road for the first time with games at Arizona and Arizona State.

FEBRUARY 4-8: You can call it the Rematch in the Rockies as Utah makes the trip to Boulder to finish its home-and-home set with Colorado.

FEBRUARY 11-15: Stanford and Cal come to town for their only meetings against the Utes during the regular season.

FEBRUARY 18-22: Road dates with the Oregon schools with no return dates against the Ducks and Beavers in SLC during the 2014-15 season.

MARCH 4-7: The last road trip of the season sees the team in Seattle and Pullman for games against UW and WSU. With the Pac-12 Tournament starting Wednesday, the league does not schedule Sunday games the final weekend.