On July 11, the Runnin' Utes lost a legend, as Billy "The Hill" McGill passed away at the age of 74. But his name will continue in the annals of Utah men's basketball, splashed across every all-time scoring and rebounding list.

Share All sharing options for: Billy "The Hill" McGill Lives on in Runnin' Utes Record Book

Everyone knows someone who had a relative pass away suddenly and says, "I didn't have a chance to say goodbye." It's often the same with fans and our sports heroes. On July 11, Runnin' Utes basketball lost a legend rather suddenly, as Billy "The Hill" McGill passed away at the age of 74.

For younger fans who aren't familiar with McGill, you only have to look up into the rafters of the Jon M. Huntsman Center to see his no. 12 jersey retired among numbers and names that you do know. Hanging there along side McGill are jerseys belonging to Andre Miller, Keith Van Horn, and Andrew Bogut, yet The Hill may still tower above them all.

It only took McGill just three seasons to rewrite the Runnin' Utes record books. Even though it has been 52 years since McGill patrolled the paint at the Einar Neilsen Field House (the precursor to the Special Events Center, later to be named the Jon M. Huntsman Center), he remains the Utes all-time leading rebounder and second leading scorer.

At 6-foot-9, McGill stood out in 1950s Los Angeles, and the giant of a man stood out even more as the very first African American to play basketball for the University of Utah.

Some credit McGill with one of the great innovations in the history of the game of basketball, the invention of the jump hook. In any case, the jump hook was the main weapon in his arsenal and helped him to second team All America in 1961 and consensus All America first team in 1962. In 1960-61, McGill led the no. 11 (AP)/13 (UPI) ranked Utes to the NCAA Final Four, losing to eventual champion Cincinnati. In the 1961-1962 season, McGill led the NCAA in scoring, averaging an incredible 38.8 points per game (along with 15 rebounds per game). Utah finished the season ranked no. 7 in the AP poll and no. 11 in the UPI poll. 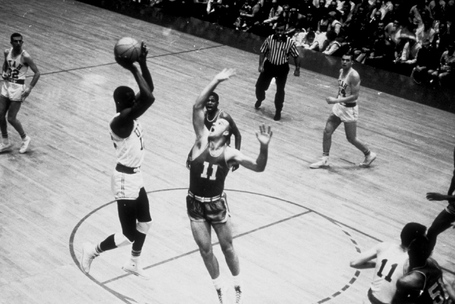 Many Utes fans remember consensus college basketball player of the year, Andrew Bogut, being selected by the Milwaukee Bucks no. 1 overall in the 2005 NBA Draft. But what fans may not remember is that Bogut was not Utah's first no. 1 overall selection. Billy McGill was taken first by the Chicago Zephyrs in the 1962 NBA Draft.

Even while McGill has left our plane, his legend will remain, etched into the pages of the Runnin' Utes record books. Anytime a fan begins looking for Utah's all-time scorers and rebounders, he'll notice a name that appears again and again. And in those lists and pages, the legend of Billy McGill will continue to live on. Only three Utes have ever recorded more than 2,000 points and 1,000 rebounds, and McGill is second all-time in scoring (2,321 points) and first in rebounding (1,106). To put the numbers into perspective, McGill played one fewer season than all-time scoring leader Keith Van Horn, yet The Hill remains the record holder for most points scored in a season (1,009). Van Horn never scored more than 705 points in a season, which actually ranks just eighth all-time. (Even Bogut ranks above the great KVH at no. 6, having poured in 715 points in the 2004-2005 season.) Van Horn had the advantage of 206 made three-point shots (an additional 206 points), something that didn't exist in McGill's era. For rebounding, McGill sits alone in first and second place for rebounding average in a season (15.0 and 13.9 rebounds per game respectively), even the big Aussie didn't average more than 12.2 in a season.

We never got a chance to say goodbye, but rest in peace, Billy. You will be missed, but not forgotten.