During a Monday morning workout, former University of Utah and NFL football great Kevin Dyson looked across his neighborhood gym in Nashville, Tenn., and saw some people with MUSS t-shirts. Over a thousand miles away from Rice-Eccles Stadium and the Utes' storied student section, Dyson was both surprised and excited and threw up his "U" signal to them. Then it was their turn to be excited to meet one of Utah’s most talented and beloved players to ever suit up for the Utah football team, and a now a soon-to-be Crimson Club Athletics Fund Hall of Famer.

For someone with all-time records, numerous all-conference honors, first-round draft pick, and even a Super Bowl appearance, Dyson is still humble about his recognizability and accomplishments. So humble is he, in fact, that when he got the call in the spring that he'd been selected as an inductee into the 2014 CCAF Hall of Fame the first year he was eligible, he was shocked.

He had some warning that something like this might happen. University of Utah Associate Athletics Director for Development Manny Hendrix had mentioned to Dyson that he night be next after Keith Van Horn, who was on campus the same years as Dyson, was inducted in 2012. Dyson admits that during his playing days at Utah, his only exposure to the Hall of Fame was looking at the plaques of members when walking by the athletic department, but when Van Horn went, Dyson took notice. He was hoping to get the nod, but didn’t think it would come so soon. He thought some Utes might enter the Hall ahead of him, like friend and former wide receiver Bryan Rowley, among others.

"I feel like there’s a few people that are deserving of it that aren’t in," Dyson said. 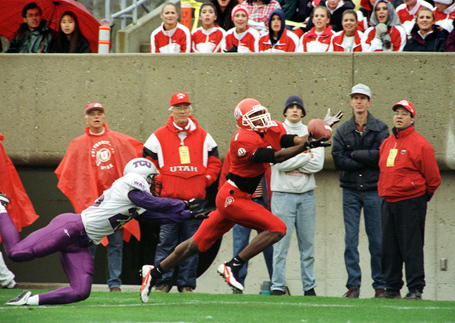 But sure enough, when it was time for the athletic department to release their list of inductees, Dyson found his phone ringing with Hendrix on the line to let him know his predictions had come true.

Dyson will be joined by another Utes legend from the mid-1990s, Andre Miller. Dyson and Miller were friends during their Utah days and even had a class or two together. Although they haven’t stayed as in touch as much as Dyson would have liked, he remembers Miller coming to watch his games when the Titans would play the Cleveland Browns during the time Miller was playing point guard for the Cleveland Cavaliers. But they still remain friends, and Dyson is happy to be going in with him. This isn’t the first time the pair will be making history together. In 1998, they both were drafted into the pros in the first round.

Dyson may be humble about all he has done, but to Utah fans, he’s still a big deal. Even more than 15 years later, his popularity precedes him with fans everywhere from his neighborhood gym to countless Utah fans who still remember the highlight videos of the big-time catches he made to bring the Utes some of their most memorable wins, like the winning catch in the 1994 Freedom Bowl. His resume for the induction shows just a little of why the Dyson name is on the legendary track. The wide receiver was a two-time first-team All-Western Athletic Conference selection, is Utah's all-time leader in receptions at 192 and is second in receiving yards with 2,726. Dyson was a first round NFL Draft pick in 1998, taken No. 16 overall by the Houston Oilers that then became the Tennessee Titans. He played for the Titans in the 2000 Super Bowl.

It’s still too early for Dyson to know exactly what the induction weekend will look like for him. There will be plenty of planned festivities including be the Crimson Club Athletics Fund Hall of Fame dinner and induction ceremony on Friday, Sept. 5 at Rice-Eccles Stadium & Tower, followed by Utah football against Fresno State on Saturday, where the inductees will be introduced to the Utes faithful. But Dyson says otherwise he’s still working out the details. He expects his mother will be there along with other family members. But as for former teammates or taking some time to talk to Utah’s current talented receiving core, those plans are still in the works for one of Utah’s all time receiving leaders.

Dyson and his brother Andre, who also played in the NFL, have both had their jerseys retired at Clearfield High School, but this is the family’s first Hall of Fame-type nod.

"I’m excited about it, definitely," said Dyson. "It’s not every day you go into a hall of fame. To be recognized for college accomplishments is a true honor."