The Pac-12 Network was at fall camp today to watch Kendal Thompson battle returning starter Travis Wilson, as well as watch the competition at running back.

Oklahoma transfer Kendal Thompson had the better day in the position battle everyone wants to know about, and junior running back Devontae Booker also stood out.
Quarterbacks:
Thompson started out decently with two completions to junior tight end Evan Moeai (the new backup, at 6-2, 241 pounds). Thompson looked better overall than incumbent Travis WIlson, but the junior transfer had an interception to Nate Orchard on a screen pass. Thompson had a keeper which he almost took in for a touchdown.
Wilson had multiple misses and had an off day overall, including a ball batted at the line by defensive end Hunter Dimick. WIlson had a run off a read option for a touchdown and did a nice job evading pressure to complete a pass on one play. Both WIlson and Thompson were under pressure though and each were sacked and forced to throw passes away.
Conner Manning only attempted two passes during the redzone drill, but both were touchdowns fit into tight windows. Manning looked very good at quarterback in very limited reps today.
Running Backs:
Utah's three-headed monster looked good today. Redshirt freshman Troy McCormick had a nice run on a sweep around the left side where he showed some good power and speed to almost score. McCormick appears too small to be a feature back for Utah, but he runs with great power for someone his size and may become the starter in his junior year when both Devontae Booker and Bubba Poole are gone.
Booker had a very nice run where he showed good vision to find the hole and cut to it for a touchdown. He had another good power run for a touchdown. He did not have any fumbles today (something that has been a concern about him lately).
Poole was the quietest of the bunch today with only a few short runs.
Wide Receivers/Tight Ends:
Sophomore Delshawn McClellon probably had the best play today from the wide receiver position, with a nice run after the catch for a touchdown on a screen pass from Thompson. He looks like he may solidify himself as a starter. Senior Andre Lewis (6-3, 208 pounds) had a touchdown reception on a screen from Conner Manning. Westlee Tonga and Moeai both had targets and receptions today, as noted above. Senior Dres Anderson had a touchdown catch in the endzone from Wilson.
"We have a lot of fast guys and playmakers on offense and we should be able to put some points on the scoreboard," Anderson said.
Defense:
The defense had a few nice stops bottling up Booker and Poole. There was also the noted interception by Orchard, and the batted pass by Dimick. It is a bit concerning how effective defensive ends were at getting their hands on passes. Orphey had nice coverage in the endzone and broke up a Wilson pass. There was good pressure from the defense on both Wilson and Thompson, forcing errant throws or forcing the quarterbacks to throw the ball away.
"I'm just trying to do everything I can to help the team," Dimick said. "Everyone [on the defensive line] is coming along well. We are a little lighter than in past seasons, but being quicker has been a bonus."
True freshman cornerback Travonne Hobbs did have a pass interference call while covering fellow true freshman wide receiver Kenric Young. The young wide receivers and defensive backs have had plenty of playing time to prove themselves in just the first week of practice.
Offensive Line:

Offensive line coach Jim Harding said he liked the depth of his group and could see the possibility of playing a rotation of eight or nine players by series to accommodate Utah's up-tempo offense.

"The guys have bought in and worked over the summer," Harding said. "Senior left guard Junior Salt adds a great deal of physicality. He's also demanding [of his teammates], but doesn't have to say a lot."

"We have a lot of things we want to accomplish," said head coach Kyle Whittingham. "Number one, we have to continue to evaluate the quarterbacks. We have to continue to sort that out. We need an extensive look and body of work to get that done. With the tempo of the offense, we have to make sure we're playing fast enough in a game-like situation. The right side of the offensive line will be critical. We have to get that solidified. Tackling on defense, we haven't had a lot of live work up until this point, but we have to get a gauge of where we are with that. We also have to find out what we have with a lot of the young guys."
Sky-High Punt Competition:
The team ended practice with linemen and coaches trying to field punts. Andrew Albers had a great catch in a crowd of players where he bobbled the ball in the air but ended up catching it. Most of the other linemen came close, but wind made the ball fly around in the air, so it was tough for them to adjust.
Play of the Day: Delshawn McClellon's catch and run on a screen pass. Utah will need plays like this season for the offense to really improve over last year.
Player of the Day: Devontae Booker - the junior running back showed good power, vision, and change of direction in his running today and had several good touchdown runs in the redzone drill.
Pac-12 Network In Town:

The Pac-12 Network crew was at Utah football practice today for their Pac-12 Football Training Camp special. Utah is one of their first stop on a road trip that will cover all twelve Pac-12 teams.

The @Pac12Networks are in #SLC today for @Utah_Football training camp. Watch the episode this evening at 10 p.m. MT! pic.twitter.com/mPOVcnZkjc

Former UCLA and Washington head coach Rick Neuheisel and said he thinks Utah is a good looking team this year, with upgrades at the skill positions, noting players like Delshawn McClellon, Kaelin Clay, and Kenneth Scott. On Wilson, he noted a quicker/shorter throwing motion, and Wilson does well on short, straight throws but struggles with the throws over the linebackers, which is where many of his interceptions came from last year.

Part three of the Camp Olympics was catching punts, and the Pac-12 Network's Mike Yam even got involved.

With a little encouragement, @Pac12Networks @Mike_Yam got involved in the sky-high punt competition. @Utah_Football pic.twitter.com/eGKKPG2uwo 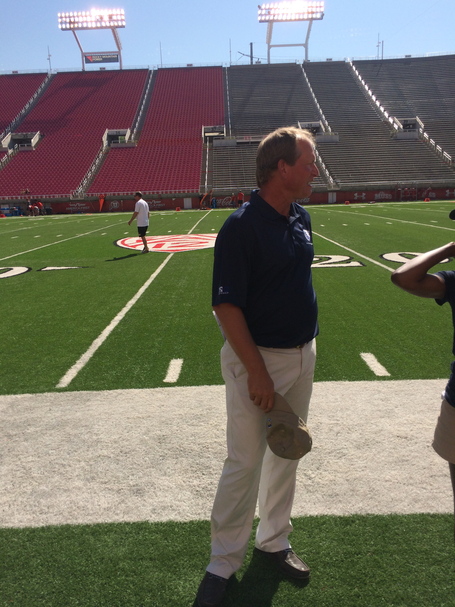 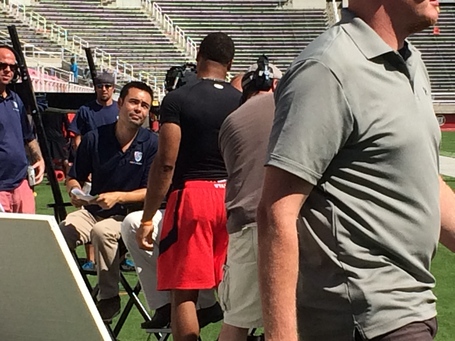 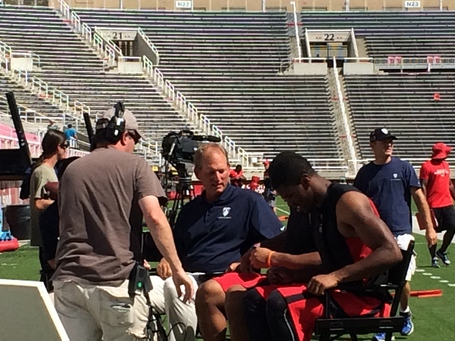 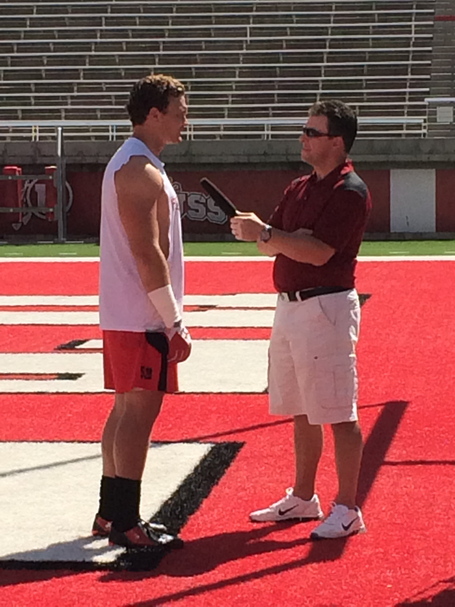 Jason Whittingham being interviewed by the Pac-12 Network 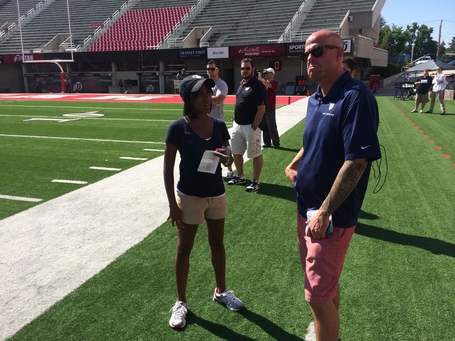 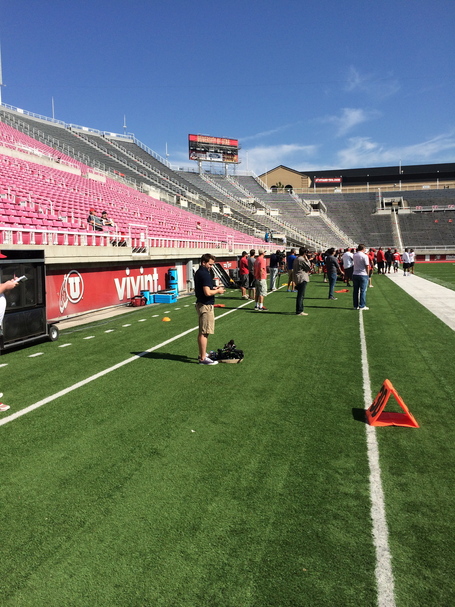 Several other members of the Pac-12 Network Crew