Being a Utah football player runs in the family for cornerback Chandler Johnson, son of the Utes all-time career rusher, Eddie Johnson.

They both donned the crimson and white jerseys, one on offense, and one on defense. For Utah's all-time leading rusher Eddie Johnson and his son Chandler Johnson, a redshirt senior cornerback, playing football for the Utes is a family thing.

In the 1988 Rice Bowl, in which Utah vented years of frustration against the boys in Provo blue en route to a 57-28 victory, Johnson had one of the more memorable rivalry highlights. Running off left tackle at the one-yard line, Johnson ran to the left side of the end zone for a touchdown and got a low-five congratulations from a male BYU cheerleader.

But some Utes fans may not know Johnson's son, Chandler, a cornerback and special teams player. Chandler started his career at Utah as a walk-on wide receiver before coaches switched him to cornerback, a position he had never played previously. Most of his career has been spent playing special teams, making tackles, and returning a few kicks. The redshirt senior from South Jordan, Utah has seen some playing time at cornerback during fall camp, covering receivers like Tim Patrick. Chandler's passion and drive for the game of football will only help this season's secondary, as they try to improve from last season.

When asked about playing at the same school as his legendary father, Chandler said "There's a lot of pressure, because they expect you to be just as good. I kinda like [the pressure], people expect big things from me."

Though none of Utah's current football coaches coached his father, Johnson said they all knew him and what he did at Utah, so that brings high expectations. Chandler does get advice from his dad, who tells him to "work hard, show the coaches you love being out here."

Eddie told us that he had to back off with Chandler when he was younger, but he still will breakdown his son's plays with him over the phone. The younger Johnson said playing a different position from his record-setting father does help lessen expectations a bit, but Chandler is the kind of player who does not back down from a challenge, rather embraces it.

Chandler will graduate with his degree in communications in December. It is very clear Eddie is a proud father, watching Chandler's accomplishments and work ethic. The younger Johnson stepped into a situation with a lot of pressure and succeed athletically, academically, and personally. 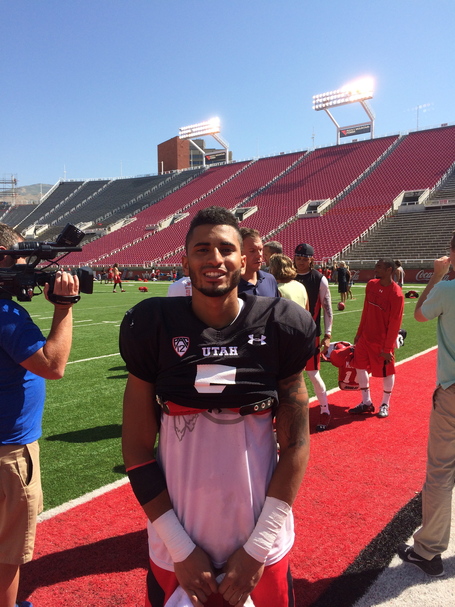 Here is the audio version of Eddie Johnson's interview: