From the Press Box: Gionni Paul is Back

For the first time this season, Gionni Paul was available for interview, so we caught up with him and head coach Kyle Whittingham.

Share All sharing options for: From the Press Box: Gionni Paul is Back

It was something I think most fans were expecting, that linebacker Gionni Paul would be back for the Michigan game from the broken foot he suffered during spring practice. On Monday, he was listed as the starting Mac linebacker on the depth chart.

"He looks like he's in good shape as far as coming back off the injury. He's showing no ill effects so far. It's only been a few days, but it's coming at the right time, we need him desperately to play some good football for us."

Paul said he was finally getting healthy. Without any hesitation or doubt in his voice, he said his foot is 100 percent. He also anticipates playing the entire game against Michigan.

Paul said there was no adjustment necessary coming back from the foot injury to practicing. His foot injury gave him plenty of time to study the playbook and understand the Utah defense.

"I stayed in my playbook during the offseason and just rehabbed 24/7, so it was no big adjustment, just getting back together with my teammates and having fun. I was born to play this game. I just wake up and thank god that I came back as fast as I could and counting down the days."

Of the Michigan Wolverines, the Utes next opponent this Saturday, Sept. 20 at 1:30 pm MT, Paul said Utah just needs to play their game, do what their defense normally does.

"Michigan's a good team, we gotta go out there and play our game, and, you know, and have fun, and play Ute ball. As a defense, we gonna fly around and make plays, like we been doing the first two games, so we gonna do that for the Michigan game."

Paul is taking picking up the rifle, so to speak, for Jason Whittingham who is out with an injury. With the emergence of Jason Fanaika and Hunter Dimick at defensive end, pass rushing nightmare Nate Orchard is now listed at both end and stud linebacker, depending on the formation.

"We got the next man in mentality," Paul said, "so one soldier go down, the next soldier up."

Paul said he was working every day in whatever manner he could. The new facilities definitely got high marks from the transfer from Miami.

"Everyday possible I rode a bike, do what I can do running in the pool. We got a great aqua station in our training room, so I did that everyday, so my condition is up to par," said Paul. 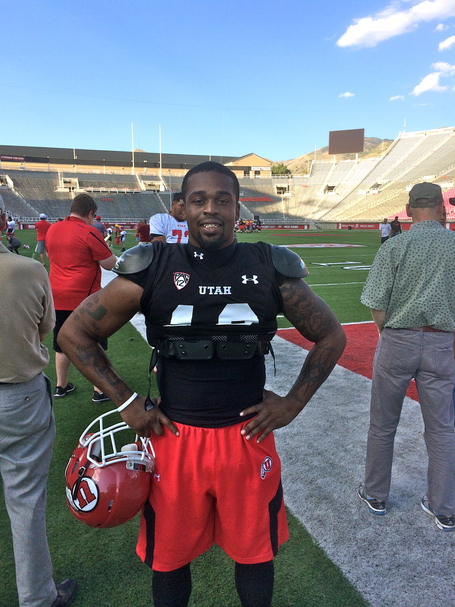 "Today was a very good practice, one of the best since the season has started, which hasn't been all that long, but good focus today, good energy. Not a long time on the field, but quality time on the field," said Whittingham.

Utah, of course, is in the final stages of preparation for their matchup with Michigan in Ann Arbor. Road games have been less than kind to the Utes since joining the Pac-12.

"I don't think there is a secret," Whittingham said. "You just have to prepare well through the week, and you gotta handle the road trip the right way, understand that it is a business trip, which our guys have done good job of. We don't think there is any flaw in our approach as far as the mechanics of the trip and that type of thing. We just got to get better results. We gotta play better. We gotta coach better."

Whittingham knows all about the tradition of the Michigan Wolverines, but he understands the past is the past. The Utes aren't playing the Big House.

"We just got to keep improving upon what we've been doing in the first couple games. We understand there's a big challenge this week, but we are off to a good start. You can't press, you can't try and force the issues. You just got to play your game and let the game come to you."

The team mostly did drills during the media viewing session and finished with some 7-on-7 red zone work for a few minutes. Quarterback Travis Wilson looked sharp and had nice touchdown passes to wide receivers Kenneth Scott and Tim Patrick. Dres Anderson stayed after practice to work on catching passes from the JUGS machine.

I also saw starting center Siaosi Aiono and starting left guard participating in practice. They both left the Fresno State game in the second quarter, but they both looked sharp in their drills with offensive line coach Jim Harding and are listed as starters on the depth chart for the Michigan game.

Wide receiver Kaelin Clay made a catch during the 7-on-7 and looked healthy after taking an illegal hit on a punt return during the Fresno State game (though Clay did return to that game after the hit).

"We were mostly able to use the bye week to heal bumps and bruises," Whittingham said. "We're in a lot better shape right now than we were a week ago today. In that respect, there are two or three guys who may not have played if we had a game last week but who will be playing this week, so it was good to us in that respect."

Here are our interviews with Coach Whittingham and Gionni Paul after practice.