Inside the Numbers: Utah v. Michigan

We dig into advanced metrics to see which team is better and try and get a handle on the performance of Devin Gardner and Travis Wilson.

Share All sharing options for: Inside the Numbers: Utah v. Michigan

Today, we are going to take a look at Saturday's match up in the Big House with some advanced football analytics. Michigan is a bit of an unknown, especially to most Utes fans. First, we're going to dig down and see if we can figure anything out about the quarterbacks in this matchup, both enigmatic for different reasons. Next, we'll go head-to-head and see how Michigan and Utah measure up as a whole. 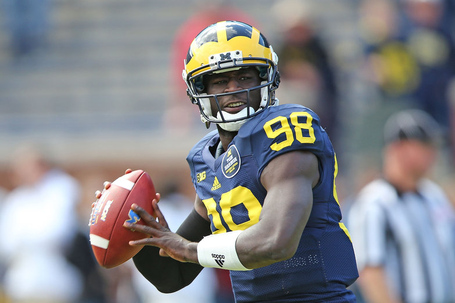 Devin Gardner was a highly recruited dual-threat quarterback, ranked no. 1 by Rivals.com in 2009. His reputation is as a dynamic playmaker who is prone to big mistakes, especially when he's under pressure or the game is on the line. If we dig deeper, the numbers tell a slightly different story.

The completion percentage is impressive, but we see lots of sacks and too many interceptions. The sack numbers really stand out, given Michigan's big, experienced offensive line.

ESPN.com publishes a stat called EPA (Expected Points Added) that can help quantify what a player means to his team. The premise is simple, the stat team looks at every play and assigns a portion of its expected point value to the quarterback. What you wind up with is a number that tells you how many points a quarterback has added to (or taken away from) his team's score on average. EPA is broken down into Pass, Run, Sack, and Penalty EPA.

These numbers show a competent passer, 35th in the nation in pass EPA. They suggest that Gardner actually costs his team when he runs the ball, and that's not taking his 34th worst sack rate into account. The picture taking shape is of a typical pocket passer who doesn't move well, either to avoid sacks or gain yards. Adjusted QBR is an opponent-adjusted metric that combines all these numbers into a score from 0-100, where 50 is average.

What about the most common accusation, that Gardner wilts under pressure, forcing bad throws, and getting picked off? Unfortunately, NCAA stats don't track QB hurries or blitzes, so we can't perfectly isolate those stats. What we can do is look at Gardner's performance in obvious passing downs (third and seven or more yards to go). In these situations, the Michigan senior is more likely to face a blitz, as well as feeling increased pressure to keep the drive alive.

Gardner's passing down numbers are down but not abysmal: 5/10, 1 TD, 1 INT, 66 yards, 118.4 passer rating. It's a small sample size, but his numbers last year are similar, with a passer rating of 108.34. It's very typical for a quarterback to experience a drop off in passer rating on passing downs, and these don't stand out as unusually poor. Gardner struggles a little, but he doesn't melt down completely.

Gardner in a nutshell:

Gardner has not lived up to his dual threat billing, and has become a pocket passer with something like league-average ability. He doesn't handle pressure well, but he isn't abysmal. His worst tendency is actually holding on to the ball too long, taking too many sacks.

Now let's talk Travis Wilson. It's hard to know what we have, as last year was the Tale of Two Wilsons, the pre-injury Top 10 QB, and the post-injury sophomore with no zip on his passes and mediocre numbers. This year, we only have four quarters of data to work with, and it's against pretty terrible competition, particularly as Fresno State continues to give up 50 points to everyone, including my sainted grandmother and her quilting circle. 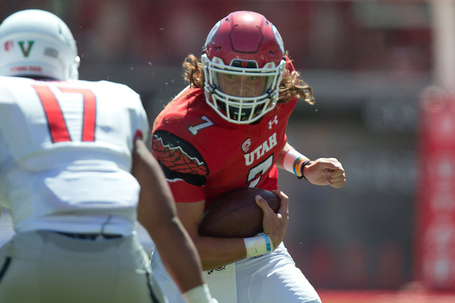 What's that you say? You haven't read anywhere that Utah's QB is one of the best in the country? Neither have I, but he is!

EPA suggests that a lot of this excellent performance is thanks to the dynamic play of senior wide receiver Dres Anderson and junior wide receiver Kenneth Scott. The other issue is playing time. With only four quarters to work with, Wilson has less chance to rack up the EPA.

These two are pretty close, although Wilson has been a better runner and better given his competition. As Wilson starts throwing into the teeth of elite defenses, you will see these numbers start to trend rapidly upwards (if he's successful) or tail off towards 50.

Now, let's take a look at Travis Wilson's numbers in passing downs. The Utes have been brutally efficient this year, and Wilson has only thrown seven balls in passing downs. His numbers there are very solid: 4/7, 1 TD, 0 INT for 76 yards, good for a 195.49 passer rating. Passer rating isn't weighted by opponents, so these numbers will start to be more meaningful over the next three games, which are against better defenses. A blitz is a blitz, though. Wilson keeps his cool and delivers the ball well even with linebackers coming after him.

Wilson in a Nutshell:

Wilson has demonstrated lethal efficiency and puts the ball in the right place for his receivers to rack up big yards after the catch. While not a true dual-threat, Wilson has explosiveness in the running game: he already has a 17 yard run and a touchdown. Wilson is off to one of the best starts in the country statistically, and he has the opportunity to put up incredible numbers if the Utes can continue to perform.

We've taken a look at the quarterbacks, but now it's time to get a sense of these two teams as a whole. Most of us saw the score from the Notre Dame game and started to think of Michigan as a should-win game. If you just look at the points, that's a reasonable position to hold. Advanced metrics, however, tell us that the Notre Dame game was closer than it looked and that Michigan is a very dangerous team, just about even with the Utes.

As the year wears on, more numbers will start to crop up. Lots of advanced metrics don't work well until you have a larger sample size. F/+ gets around this by using a five year weighted average to help make the numbers realistic for the first six weeks. ESPN doesn't appear to weight their numbers at all, so they will simply be taken with a grain of salt until everyone has played 6 games or so.

F/+ is a metric used by FootballOutsiders, which is composed of two parts, S&P and FEI. S&P combines sophisticated measurements of explosiveness and efficiency, along with starting field position on offense and defense. FEI is a pure efficiency metric. Every number produced by F/+ is weighted according to the opponent.

FEI favors the Utes, who rank 33rd (.127). Michigan has a solid score, but trails behind at 44th(.083). This suggests that the Utes have been the more efficient team, finding success on 1st, 2nd, and 3rd down, rather than getting their yards in chunks.

S&P leans the Wolverine's way, who rank an impressive 24th (222.6) in the nation. The Utes trail well behind at 45th (212.4). This is particularly surprising given that the Utes have one of the best special teams units in the country, starting an average of 17.3 yards closer to the end zone than their opponents (3rd, behind Stanford and Georgia).

F/+ overall slightly favors Michigan, ranking them 35th (9.6%) while the Utes are in 41st (8.6%). These numbers don't match the raw statistics because the Utes haven't played anyone like Notre Dame. Michigan was doomed by turnovers against Notre Dame, a metric that varies wildly from game to game and is almost impossible to predict. When you boil the numbers down to efficiency and explosiveness, the Wolverines held their own.

Massey Ratings aggregates every poll and ranking system in college football and spits out an average rank. This is a nice way to see how public opinion is trending, particularly when combined with movement in Vegas betting lines. Massey puts the Utes ahead of the Wolverines, ranking them 39th to Michigan's 49. This reflects the downturn in expectations following the blow-out loss to the Fighting Irish.

Vegas has also been sliding the Utes way, although they are still the road underdog. Most lines opened with the Utes picked to lose by about 6-7 points, but over the last few days they have slid closer to a pick-em, seeming to settle in at 4.5- or five-point underdogs. I suspect that gamblers are looking at the mostly ignored Utes' production and recognizing that they could give Michigan a real run for their money, even in the Big House.

Football Power Index is ESPN's version of F/+. Their formulas include an FPI ranking, as well as efficiency rankings for offense, defense, special teams, and overall. FPI also computes a percent chance of victory: Michigan is projected as having a  56.9% chance to win, with the Utes at 43.1%.

These numbers show that the Utes have been considerably better overall, with an explosive offense, incredible special teams play, and a defense that gives up more plays than it should, despite low point totals. That gels with our perception of this team, including the questions raised on defense in the Idaho State game.

This game isn't a gimme, or even a should-win. The Utes are playing a talented, athletic team in an intense venue that provides significant home field advantage. Michigan's reputation for making mistakes and folding under pressure is a bit premature, and formed from one road game against Notre Dame, a playoff contender. Devin Gardner is a solid, competent passer and he has some incredible athletes available to catch the ball, but he isn't going to surprise anyone at this point.

The Utes match up well with the Wolverines, featuring powerful athletes, great receivers, and a havoc-inducing defense that lights a fire in the backfield and then roasts marshmallows. They also have a quarterback in Wilson who is almost all upside and continues to impress and improve.

To me, offense and defense is more or less a wash between these two teams. What stands out through all of the stats I've looked at is special teams. The Utes are ranked in the top three in every advanced statistical category with regard to special teams, and have one of the best punters, one of the best kickers, and one of the best return men in the country.

I think this one is going to be a grind, with a few explosive plays on either side keeping the score close. In the end, Tom Hackett wins this one by giving long fields to the Wolverines on every possession.