Utah kicked off their 2014 season by beating the overmatched FCS Idaho State Bengals.

Not the most pretty at times, especially the opening series by the offense, which was a quick three and out, but Utah took care of business Thursday night by dispatching the Idaho State Bengals 56-14. After an initial hiccup by the offense, resulting in a punt, the first team got on a bit of a roll and played well most of the first half. We only saw Travis Wilson in the first half, where he racked up a nice 265-yards through the air, with one touchdown, on a very efficient 13-of-18 (72%) passing. Wilson also rushed four times for 12-yards, including one high-flying touchdown. When Wilson was on the field, it was apparent he is easily deserving of the starting roll. At times the offensive line would allow pressure, and Wilson made some nice throws under duress, especially to Westlee Tonga, who missed most of 2013 with injury.

Devontae Booker and Bubba Poole both had great games rushing. Booker had 78-yards, Poole had 42, and both averaged over 7-yards per carry. Booker also had a 61-yard reception on a perfectly executed screen pass from Travis Wilson, that fell just short of the goal line. I predicted Booker would be the 'X-factor' for the Utes, and would eventually overtake Poole as the main guy, and tonight reaffirmed that for me. Poole will still be a major contributor, but Booker will be the starter at some point, if not against Fresno.

As for the wide outs, boy it was great to see some playmaking out there by somebody other than Dres Anderson. Of course, Anderson did what he does, by going over 100-yards receiving with 111 on  four catches. The Dark Knight, Kenneth Scott had a very nice return to the field with 57-yards on four catches, including a very nice touchdown reception from Travis Wilson at the end of the 1st half. And as I mentioned earlier, Westlee Tonga provided great relief for Wilson on some bailouts when Wilson was under pressure. Those three, of Anderson, Scott, and Tonga, make a great three headed monster.

Weapons wise, Travis Wilson has some great options to work with, however, the offensive line left a little to be desired at times. Wilson had a little too much pressure in his face for my taste, although at least one of those pressures was because of a missed blocking assignment by the running back. At times the running backs couldn't find room to run, and against ISU, that's a problem. Here's to hoping some film study over the next week will help get them back on the same page. It should be noted that starting center Siaosi Aiono didn't play tonight, no reason was given why.

Defensively Utah started great, but gave up too many gashing runs in the first half, and lost contain around the outside a few too many times as well. For the defensive line, the lapses looked like some schematic and execution-based details that can be addressed. The linebackers and safeties need to be better in support of the run defense, as well. The main concern is with the secondary, as it was last year, namely at the corners. Eric Rowe wasn't tested much, and made some nice plays. It was Davion Orphey, and whom ever was playing the nickel, having some trouble tonight. Too much separation was allowed, and it seemed like they would lose their men at times. Again, hopefully, like the o-line, some film study will improve performance from week one to week two, but some definite red flags.

The star of the night? Senior JC transfer wide receiver Kaelin Clay. The first time Clay touched the ball in a Utah uniform, on a punt return, he returned it for a spectacular 46-yard touchdown, a feat last done by Shaky Smithson. Clay wasn't done, however. He also returned a 100-yard kickoff return for a touchdown, a feat last done by Reggie Dunn.  Clay has likely solidified both return positions, and Poole did well for himself on punt return as well! And of course, both Andy Phillips and Tom Hackett were automatic.

All-in-all, a pretty routine home opener versus a FCS team. There was some good, and there was some bad, but there is no doubt that this offense has more fire power, and the defense needs to round into form faster - especially against the pass. As they say, the most improvement happens between week one and week two, so onward to Fresno State! 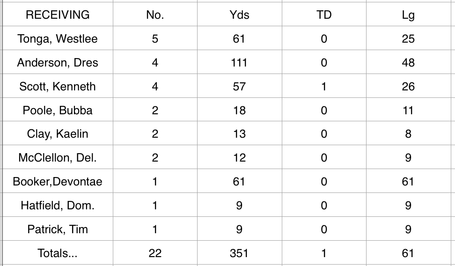