In the movie The Dark Knight Rises, Batman gets beaten and physically broken, but he doesn't lose his resolve. Utah football has their own Dark Knight, their own Batman, and his rise could help Utah football back to the postseason.

A few weeks back I talked about Devontae Booker as the most indispensable player for the Utah football team in 2014. The ability to get those tough yards on 3rd-down and protect the quarterback is going to be imperative this coming season. Having a consistent running game is a must.

With that said, one of the position groups going into the season with the most questions marks are the wide receivers. Going into last season, receiving depth wasn't a concern, because we expected to have a lethal one-two punch with Dres Anderson on one side, and Kenneth Scott on the other. However, during the second offensive series against Utah State, Scott suffered a season ending ankle injury, possibly the biggest blow to the offense outside of Travis Wilson going down. Once Scott went down, the receiving corps were thrown all out of whack. Sean Fitzgerald had to move outside and be the number two receiver, Anthony Denham played more in the slot, and neither had break away speed that is needed from a true number one or two wide receiver. That caused teams to start bracketing Anderson, especially after his success the first six games, and neutralizing him. 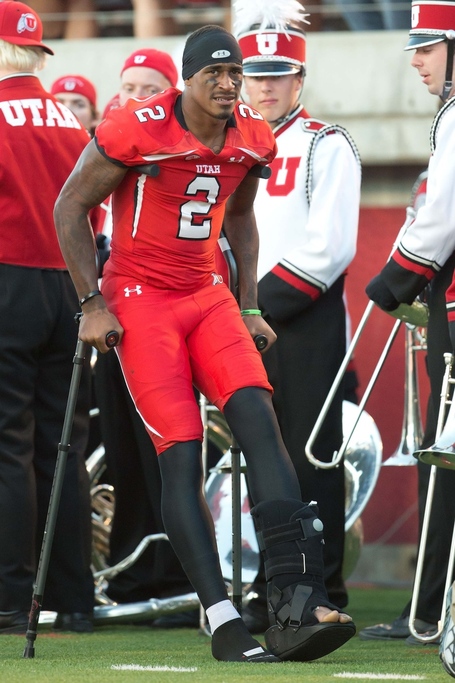 K-Scott, who was a highly sought after 4-star recruit in 2010, is about as prototypical of a wide receiver as you can get. He's 6' 3" tall, 211 pounds, runs great routes, and catches everything thrown his direction. If Scott is healthy and in the line-up next season, he will provide a reliable weapon for Travis Wilson (or whomever starts at quarterback). Scott can go get that tough catch over the middle and convert on 3rd-down. He can lift the coverage off of Dres and allow Dres to do what he does best, go deep. Not to mention, Scott is a heck of a deep threat himself and may be the best 'go up and get it' receiver Utah fans have seen in a long time.

Things started off rough for Scott as a Ute, he broke his ankle in fall camp as a true freshman, just as he was threatening the two-deep, his first of two lost seasons because of ankle injuries. In 2012 we saw the flashes of potential with his great hands and highlight catches versus Utah State and USC. He finished that season with 32 receptions and 360 yards. The 2013 season was supposed to be Scott's break-out season, after being the third or fourth receiver the year prior, behind DeVonte Christopher, Dres Anderson, Reggie Dunn, and Jake Murphy. Instead he got a break that nobody wanted to see.

As mentioned, losing Scott last season put the receiving corps behind the eight ball last season. As long as he stays healthy this season, just like so many other positions it seems for the Utes, this may one of the best receiving duos in the Pac-12. If the Utes want to get where they want to be, especially in the pass happy Pac-12, having a reliable passing game with great receivers is a must. Devontae Booker and the running game will keep the team on schedule and on the field, but it is Anderson and Scott who have to make the big plays and keep defenses off balance. With a healthy Scott, that will add an added dimension to this team that we've been wanting for a long time, a dangerous one-two combo on the outside.

Kenneth Scott is a big Batman fan, his twitter profile is covered with the Batman logo, and he has plans to wear Batman cleats next season. And if the Ute's Dark Knight rises, Utah will have another weapon that they've been sorely missing in their utility belt.

If you've forgotten what a talent Kenneth Scott is, here is a great highlight reel for you to check out: