Utah's new head man over the offense is named to Athlon Sport's College Football's Top Coordinator Hires for 2014. We dig into the matter a little more, to see how productive Dave Christensen's offenses really have been

Another year, another offensive coordinator up on The Hill. It's just status quo up there. However, this hire has caught the eye of some of the national media out there. Our friend Steve Lassan (@AthlonSteven) over at Athlon Sports is a big fan of Utah's hire of Dave Christensen. He liked the hire so much he listed it as one of his 15 Best Coordinator Hires of 2014.

Here's what he had to say about the hire by Kyle Whittingham:

The former Wyoming coach takes over the reins of a Utah offense that averaged less than five yards per play in conference games in two out of the last three years. Prior to his stint as Wyoming's head coach, Christensen worked as the play caller for Missouri from 2001-2008 and at Toledo from 1997-2000. The veteran assistant is tasked with fixing an offense that has struggled to find consistency since joining the Pac-12. Christensen wants to speed up the tempo, and in order for that to happen, he needs to help quarterback Travis Wilson take the next step in his development. - See more here.

The hire by Utah head coach Kyle Whittingham to bring in Christensen was a shocker, and a bit controversial. While the previous season yielded less than ideal results offensively, a good faction of fans believed the offensive struggles were due primarily to injuries. Not to mention it caused Utes legend Brian Johnson to pack up and head to the SEC. On the other hand, it brought a change at offensive line coach, for which many people were clamoring. Also, Christensen brought in Taylor Stubblefield, a popular addition, and possibly the missing key to unlocking the potential of the wide receiving corps.

After spring ball it seems that the unrest around the change has settled and most Ute fans are pleased with the course that Christensen is taking on offense. The former Wyoming head coach has pledged to bring a faster, less turnover prone offense to Utah.

Christensen, who has a long history with Coach Whitt, really started to make his name with the Missouri Tigers and was actually a finalist for the Broyles Award given to the nations top assistant. Here is a bit of his profile from Mizzou's website:

Mizzou's unique no-huddle, spread offense has drawn numerous accolades since Christensen conceived and installed it prior to the 2005 season. In 2007, the Tiger offense was undoubtedly one of the nations' most potent, as it scored a school record 558 points (smashing the old mark of 399), and ranking among the NCAA's top 10 in three major categories - total offense (5th - 490.29 ypg), scoring offense (8th - 39.86 ppg) and passing offense (9th - 314.07 ypg). His offense produced no fewer than three major national awards candidates, as junior quarterback Chase Daniel was a Heisman Trophy finalist (finishing fourth in final Heisman voting), while senior tight end Martin Rucker and freshman wide receiver Jeremy Maclin were both consensus 1st-Team All-Americans (the first time in MU history it has had two consensus first teamers in a single year).

After the success he had as a coordinator, with notable quarterbacks Brad Smith and Chase Daniel, he took his talents to Laramie in 2009 to be the head coach of the Cowboys. At Wyoming, Christensen had a very good offense, and it seemed to really come into its own in his final season averaging 31 points per game, while putting up 472 yards per game. It was his defense that really let him down in the end. Christensen did win conference coach of the year in 2011 when the Pokes finished 3rd in the MWC, behind only #13 TCU and #6 Boise. It's impressive that he was able to put up very good offensive numbers, even with the talent at Wyoming.

Christensen has had some great offenses, and recruited some great players. As noted earlier, he changed up his scheme in 2005 when the spread was really coming to the forefront. Here are his teams averages since 2001:

Also, when you look at his trends, his offenses have generally improved every single year. Obviously, when he went from Mizzou to Wyoming his output dropped significantly, but after year one with Wyo the number continued their climb. 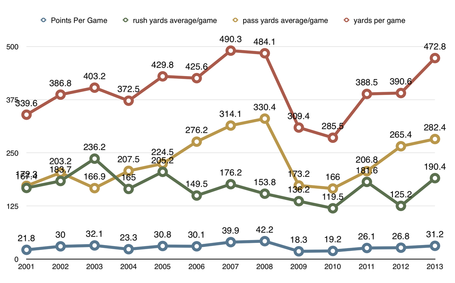 One of my favorite numbers? Christensen's offenses average about a 42% on third-down conversion. A very solid number, and they follow a similar trend with a year-over-year improvement. His best year was back-to-back seasons of a 53% conversion rate at Mizzou in 2007-08.

Here are Christensen's numbers since 2001 versus Utah's offensive numbers the last three years.

And Utah's 3rd down conversion percentage over that period of time? 34%... yuck.

Another interesting thing is that Christensen's quarterbacks put up yards on the ground as well, including Chase Daniel. While Daniel never was the threat that Brad Smith was to run, he was still mobile enough to move the pocket, keep defenses honest, and move the chains. And one of the things that coach Christensen said when he first got on campus was that he was going to minimize turnovers. His quarterbacks average almost a two-to-one touchdown-to-interception ratio.

Now on the verge of the 2014 season, and looking at his numbers, I can easily agree with Steve Lassan. The Christensen hire seems to be a good one. Along with Stubblefield and new o-line coach Jim Harding, Christensen has brought some fresh air to the offensive staff, not to mention precision and speed. Now it's time for him to make an impact on his new team, because Utah's 2014 schedule is one that will put Christensen's offense to the test.